The --no-ff flag prevents git merge from executing a “fast-forward” if it detects that your current HEAD is an ancestor of the commit you’re trying to merge. A fast-forward is when, instead of constructing a merge commit, git just moves your branch pointer to point at the incoming commit. This commonly occurs when doing a git pull without any local changes.

However, occasionally you want to prevent this behavior from happening, typically because you want to maintain a specific branch topology (e.g. you’re merging in a topic branch and you want to ensure it looks that way when reading history). In order to do that, you can pass the --no-ff flag and git merge will always construct a merge instead of fast-forwarding.

What is the difference between git merge and git merge –no-ff ?

The –no-ff option ensures that a fast forward merge will not happen and that a new commit object will always be created. This can be desirable if you want git to maintain a history of feature branches. 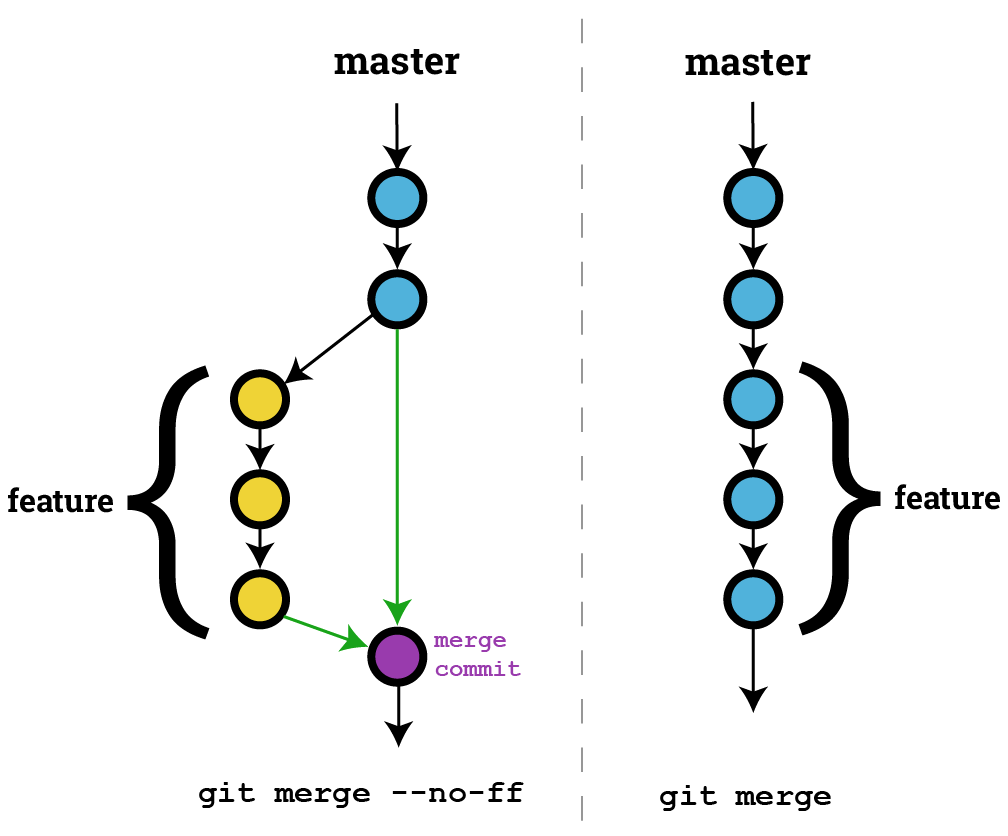 EDIT: A previous version of this image indicated only a single parent for the merge commit. Merge commits have multiple parent commits which git uses to maintain a history of the “feature branch” and of the original branch. The multiple parent links are highlighted in green.

Graphic answer to this question

Until I saw this, I was completely lost with git. Using --no-ff allows someone reviewing history to clearly see the branch you checked out to work on.

I updated a package to my website and had to go back to my notes to see my workflow; I thought it useful to add an example to this answer.

My workflow of git commands:

Below: actual usage, including explanations.
Note: the output below is snipped; git is quite verbose.

Notice 3 things from above:
1) In the output you can see the changes from the ECC package’s upgrade, including the addition of new files.
2) Also notice there are two files (not in the /ecc folder) I deleted independent of this change. Instead of confusing those file deletions with ecc, I’ll make a different cleanup branch later to reflect those files’ deletion.
3) I didn’t follow my workflow! I forgot about git while I was trying to get ecc working again.

Below: rather than do the all-inclusive git commit -am "updated ecc package" I normally would, I only wanted to add the files in the /ecc folder. Those deleted files weren’t specifically part of my git add, but because they already were tracked in git, I need to remove them from this branch’s commit:

Script for automating the above

Having used this process 10+ times in a day, I have taken to writing batch scripts to execute the commands, so I made an almost-proper git_update.sh <branch> <"commit message"> script for doing the above steps.

Instead of git commit -am I am selecting files from the “modified” list produced via git status and then pasting those in this script. This came about because I made dozens of edits but wanted varied branch names to help group the changes.

A fast-forward is what Git does when you merge or rebase against a branch simply ahead of the one you have checked-out.

Given the following branch setup:

You’ve got both branches referencing the same commit. They’ve both got precisely the same history. Now commit something to feature.

The master branch is still referencing 7ddac6c, while the feature has advanced by two commits. The feature branch can now be considered ahead of the master.

It’s now relatively easy to see what’ll happen when Git does a fast-forward. It simply updates the master branch to reference the exact commit that feature does. No changes are made to the repository itself, as the commits from the feature already contain all the necessary changes.

When doesn’t a fast-forward happen?

Fast-forwards don’t happen when changes have been made in the original branch and the new branch.

If you were to merge or rebase the feature onto master, Git would be unable to do a fast-forward because the trees have both diverged. Considering Git commits are immutable, there’s no way for Git to get the commits from feature into master without changing their parent references.

Explicit Merge (aka non fast-forward): Creates a new merge commit. (This is what you will get if you used --no-ff.)

Rebase: Establish a new base level:

Squash: Crush or squeeze (something) with force so that it becomes flat:

Other answers indicate perfectly well that --no-ff results in a merge commit. This retains historical information about the feature branch which is useful since feature branches are regularly cleaned up and deleted.

This answer may provide context for when to use or not to use --no-ff.

Merging from feature into the main branch: use --no-ff

Merging changes from main into feature branch: leave off --no-ff

How to make the current Git branch a master branch?

How to compare files from two different branches in git?

How to replace the master branch in Git, entirely, from another branch?